Prof. Dr. Özkul Çobanoğlu: “Language is a Matter of Existence for Human and Society.” 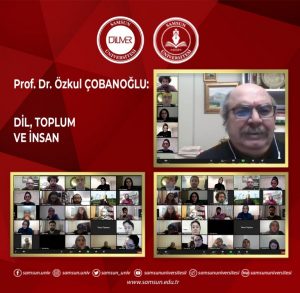 Samsun University Turkish and Foreign Language Teaching Application and Research Center hosted Prof. Dr. Özkul Çobanoğlu, moderated by Ahmet Keskin within the scope of “Online Language Seminars”. With his speech titled “Language, Culture, and Human” on an online program, Çobanoğlu explained his thoughts on the subject.
“Culture is the sum of what human produces and accumulates in his struggle with nature, and what he adds to nature.”
Starting his speech by saying “Our speech tonight will be in the triangle of language, culture, and literature, especially oral literature.” Çobanoğlu caught the attention of the audience by asking “What do we get with language and what does language provide us? What is a culture with another aspect?” Stating that the concept of culture is the foundation / main reason for our current state of being, Çobanoğlu emphasized that the most important aspect that distinguishes humans from other living things in the world is language and culture.
Çobanoğlu said that although human beings have been around the world for millions of years, the use of language has a history that can be called new. He also stated that language is inherent in human potential and ability, but the use of language with words is largely cultural. Expressing that language is something that human creates and adds to nature, and that it is very striking with this aspect, Çobanoğlu continued his speech with the following words:
“Can a person think without language? What do we get with language? A person who cannot use language can know and realize that a place touched is hot and another is cold. But it is impossible to describe it if it does not occur in words and there are no words to express it. So there is a direct relationship between language and thought. It can be said that the human species that cant think, called Homo sapiens, emerged with this way of using language. The language before words is a form of warning each other by making certain sounds, which we still see very commonly in other living things. It’s like warning a moving vehicle with a horn to another vehicle. Here, there is no densification or differentiation by adding, changing, fusing. The use of language in this aspect between speaking and thinking is a human-specific situation. The things that human creates, adds, and especially accumulates in his struggle with nature constitute culture. If a human could not accumulate his feelings, thoughts, and experiences through language, through thinking, there would be no culture. ”
“Language is a kind of a matter of existence. The formation of language is the formation of human, society and its comprehension.”
Çobanoğlu emphasized that the basic act of human beings in creating culture is to accumulate and that it is possible to use the obtained knowledge and experience when necessary through language. Emphasizing that language is the most important factor in understanding one’s self and socializing as “we”, he continued his words as follows:
“Even if you lived thousands, hundreds of thousands, millions of years before a language, this life is very different from life by thinking and producing together with language. You have to transfer the simplest cultural knowledge or experience gained through trial and error to new generations.”
Çobanoğlu said, “We need to be aware of the great price we paid for the process of obtaining this information through trial and error in a period of fifty thousand, one hundred thousand, several hundred thousand years. If there were no language, none of this would have happened.”
“Language has a unique place in the adventure of human existence. Human has been able to distinguish himself from other living things in nature thanks to language.”
Çobanoğlu touched on the fact that human is a weak member of nature in many respects and that he is a very poor and needy creature in nature. He drew attention to the fact that the culture created by a human through language enables humans to cover his weakness in nature and eliminate his weakness. Çobanoğlu also said about language: Humans can distinguish themselves from other creators through language. He can live all over the universe, in the poles, in the equator, under the sea, in space. He can also make sense of himself by naming the beings in the outer world. Without language, none of these would have happened. Çobanoğlu continued his words with the following sentences: Language has a unique place in the adventure of human existence, in the adventure of humans separating from other living things and becoming such a living being.
Saying that the dizzying change and transformation of human beings over the millennia has been achieved entirely through language, Çobanoğlu drew attention to the importance of text with the word “We cannot preserve any emotion and experience outside of the human memory and mind. The writing is important in this regard. With writing, you can push a thought into existence on its own.”
The talk titled “Language, Culture and Human”, broadcast live on the DİLMER youtube channel was completed with the intense participation, questions, and contributions of the audience. 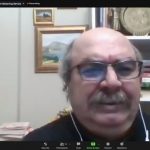 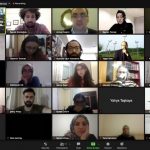 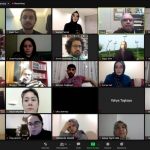